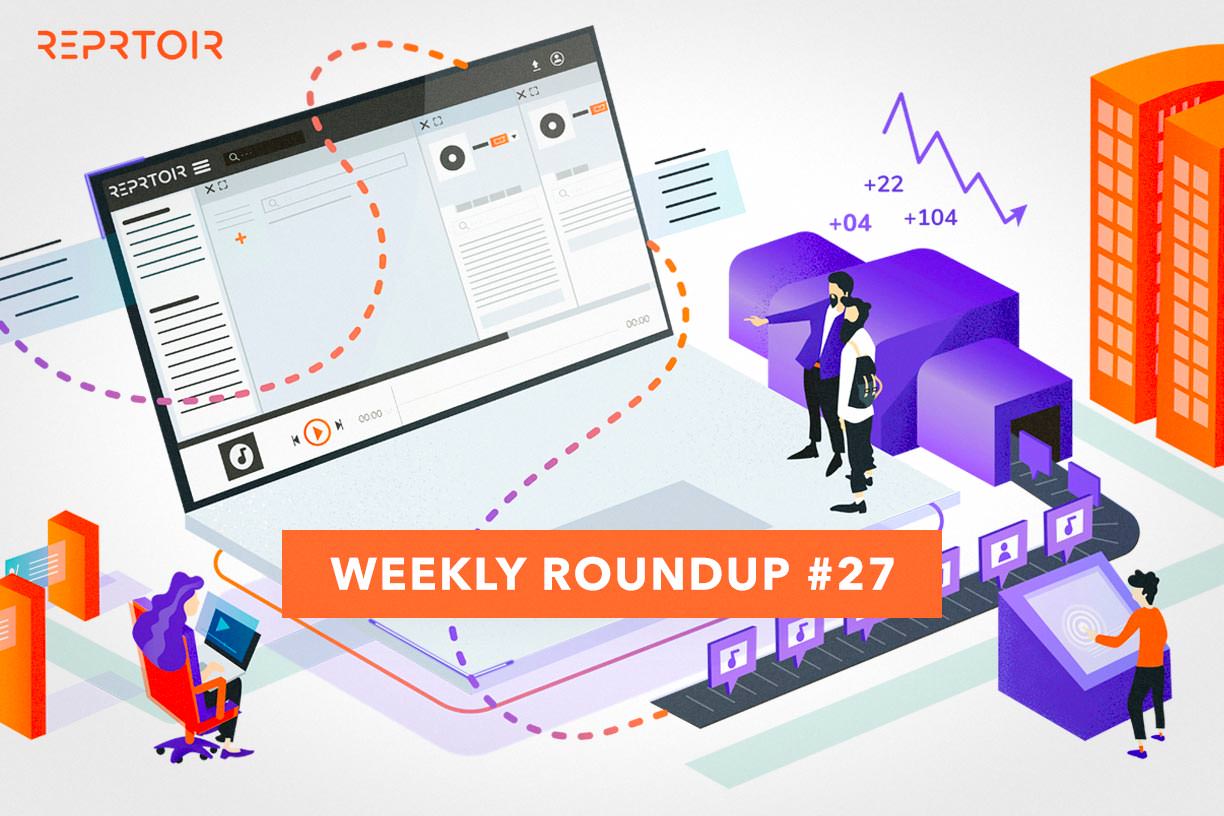 We have to talk about TikTok.

The situation for one of the most looked at medium to broadcast music today is facing many holdbacks. After being banned from India (we talked about this in our last Weekly Roundup here), the US are now talking about doing the same. Since the music industry seems to be one way for them to stay afloat and keep growing (or at least save the main growth territories), it is important to keep a close watch on what happens to the social app.

So I’ll talk a lot about TikTok this week as the summer might be decisive for them, in an already difficult and uncertain context. But, this is not the only thing going on right now and we should stay optimistic for the near future. So let’s get to a better understanding of what is happening now!

#1. What is the TikTok dispute about?

In a nutshell, it is basically a geopolitical dispute. Introducing you to: the US-UK-China’s trade dispute about ByteDance, the group owning TikTok. Since the app started to offer targeted ads online, several complaints emerged, claiming that the Chinese company was spying on its users, for the Chinese government. Trump even ran ads, on Social Media, to warn the users.

Adding this to the many problems on offensive content, targeted young users and the lack of moderation, TikTok is now facing different bans. Here is a full explanation by the BBC, including the fact that the Head of Public Policy for Europe, Middle East and Africa, Theo Bertram, clearly stated the fact that the Chinese government didn’t have any implication in TikTok.

After numerous complaints about violence and offensive content, several countries are looking into banning TikTok. India already went on with the initiative (a major part of TikTok’s user base), near countries like Pakistan are threatening to do the same and the US are now talking it over.

This would take a big hit on TikTok, there is no surprise there. To counter these (potential) bans, the company owned by ByteDance is announcing 10,000 jobs just in the US, passing deals made with the music industry to facilitate uses online. But there’s still a lot at stake here. You can find a quick recap here by MusicAlly, including potential options to involve other actors as investors in TikTok, or even for the app to become a separate company.

Speaking of TikTok getting involved with other major actors or even being bought from ByteDance, here is an interesting thought we came across this week: what about Apple?

Music Business Worldwide did a full overview of the reasons why in the eventuality in which TikTok was for sale, Apple should be the one jumping on the occasion. The AI included in Apple Music’s environment, the users acquisition and the workforce available could be great additions to Apple’s solutions. And a good way for TikTok to get out of the disputes.

Changing the subject a bit, still talking about music industry deals with tech: Spotify and Universal Music Group just announced their new multi-year licensing agreement. This agreement being basically a bit more of Universal’s investment in Spotify for a better visibility of their catalog (you can find the details in the article by Variety).

And to wrap up this Weekly Roundup, a ray of light in the live music sector. A new proposal for physical concerts is being worked on for this weekend, including safe social distancing; outside. Here are the details of the new initiative.

Music Rights Management is going to be forced to evolve

Through this accelerated digitalization of the music industry, innovation is taking an important place in rights management. How is it set to evolve?
Articles
Apr 21, 2021
by
Mathilde Neu

Music Rights Management is going to be forced to evolve

Cryptocurrency As a Future for Music Value?

We've been hearing a lot about NFT and blockchain related currencies in latest weeks. We thought we'd give it a look and see how it could fit the music field.
Articles
Mar 10, 2021
by
Mathilde Neu

Cryptocurrency As a Future for Music Value?

We've been hearing about user centric models for music streaming, but what exactly are we talking about? We went deeper on the potential change for streaming.
Articles
Mar 17, 2021
by
Mathilde Neu

The UK Parliament has been hearing the main actors of the music industry on rethinking the streaming economy. Here is an update after the final hearings!
Articles
Mar 15, 2021
by
Mathilde Neu

A Look at the Music Industry’s Statistics from 2020

We took a look at music industry's numbers after yearly reports were published by the major actors, here are a few insights from the music industry's data!
Articles
Mar 8, 2021
by
Mathilde Neu

A Look at the Music Industry’s Statistics from 2020

How can Musictech help you take full advantage of your music assets?

Musictech is a wide sector activity, but when it comes to record labels & music publishers, it's crucial to keep an eye on them to define an innovative strategy
Articles
Mar 1, 2021
by
Mathilde Neu

How can Musictech help you take full advantage of your music assets?

We offer a 14-day free trial period (no credit card required). Become a customer and benefit from our free data migration services and expert advice.
Book a call | Get a free demo | Chat with us