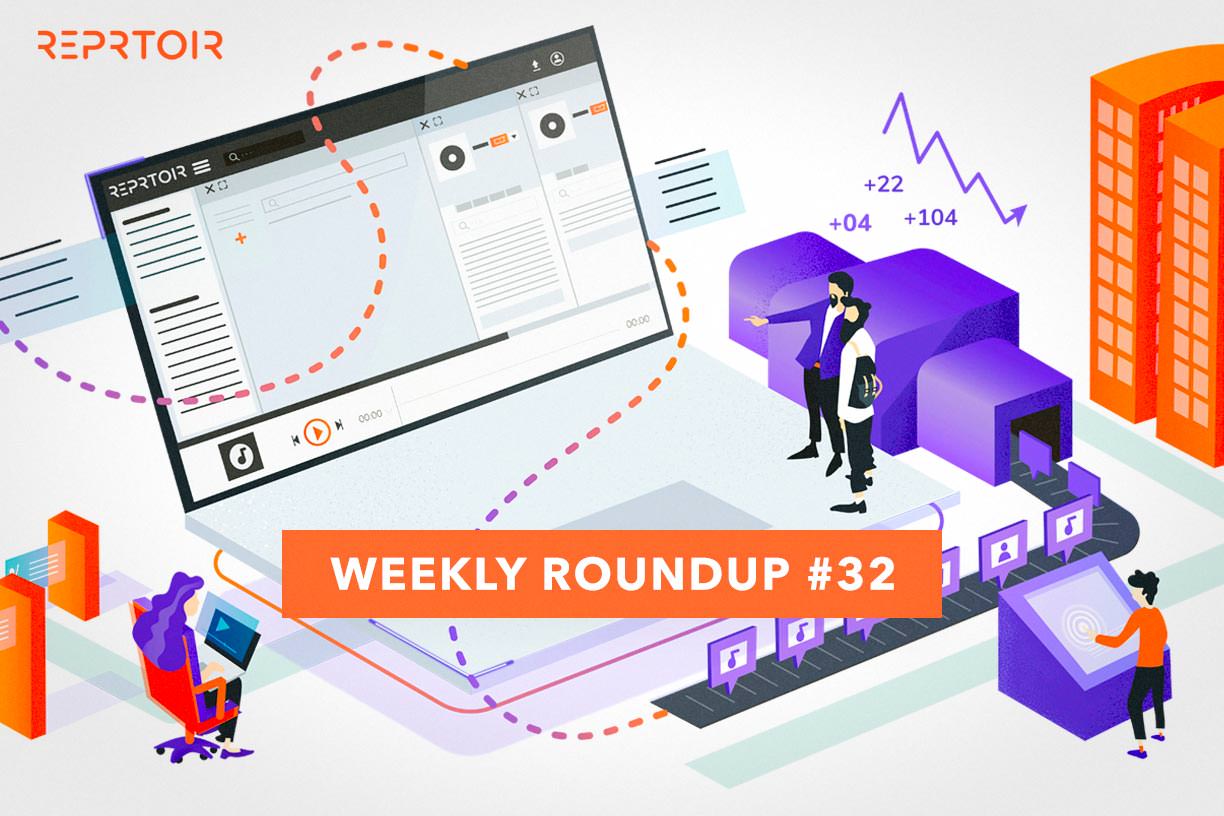 New week, new Weekly Roundup! We have been checking up on music streaming services and important buyouts this week, as well as following up on TikTok. All big moves being made today are shaping not only the future of the music industry, but also the future of entertainment. So let’s dive in!

It is becoming quite a habit: catch up on TikTok and their very opaque future. Picking up where we left off, this last week, a few developments occurred for the app. First, let’s talk about the fact that TikTok is now suing the Trump administration, as a reaction to the ban, blaming the lack of proof for actual danger on privacy. And this decision to ban the app for these reasons could have been pushed by Mark Zuckerberg, who reiterated the risks in a speech about freedom. Even if this looks more like speculation, let’s not forget that Facebook tried to acquire Musical.ly before ByteDance (who turned it into TikTok).

After these announcements, Kevin Mayer, TikTok CEO, resigned, after just 3 months in post. His departure is a result of the political climate, making his initial mission to grow TikTok’s base in the US impossible. He explained his decision to leave in regards of the potential US ban. TikTok thanked him, putting Vanessa Pappas in his position for the moment.

In the meantime, in India, where TikTok has been effectively banned, the competitor Triller just signed an important deal with JioSaavn. The biggest music streaming platform in the country will allow Triller to embed videos directly from the platform. This is a strategic move for Triller, considering that TikTok might take another big hit, to reach the entertainment major actors and take their spot.

#2. Napster and Melody VR sketching the future of entertainment

Speaking of moving around, this news was tough to miss this week. Napster has been bought from Rhapsody by Melody VR. Who could have guessed that one of the first companies to shake down the music industry would end up a part of an immersive technology group in the future? For now though, it’s business as usual. The idea is to build the foundations for a bigger project, allying immersive experiences and music streaming.

And the news has been well received. Following this acquisition, Melody VR announced raising $15.3 million through share placements. Now, we are all waiting to see the first steps towards new entertainment platforms.

#3. How to deal with fakes on music streaming?

Speaking of streaming, this week has seen other changes than platforms’ evolutions. Streaming models are and will continue in the near future to be criticized for their remuneration, but one part of this problem resides in fake streams.

The first news coming to our attention is Germany’s actions to stop specialized companies from selling fake streams. A few websites manipulating streams have been taken down, to guarantee the fairness for artists on music streaming platforms. All in all, this is a step in the right direction, giving everyone a fair chance. But where exactly is the limit?

Indeed, a problem emerged when BTS, the famous South-Korean boys band, asked their fans to stream their new track “Dynamite” as much as they could to reach an all-time high score on streaming platforms. Then when is it fair game to allow humans to stream one track as much as possible to mess up the numbers? Spotify reacted by suppressing some streams because of some “bot-like” behaviors, but guidelines were issued among fans. In any case, the numbers will be impressive, as always, but this raises the question of fairness in streaming.

Staying on our music streaming platforms news, radio is becoming one important strategic move.. Apple Music launched their linear 24/7 Apple Music Radio, betting on giving access to carefully curated content by celebrities and artists, assuming their customers will be connected on time. On the other hand, Spotify is betting on the “on demand” strategy. The two major music streaming services are on very different paths, and to understand the real strategies behind both of them (and if they’re right or not) has been discussed by Cherie Hu, right here.

To wrap up our roundup on the future of entertainment, which clearly was a theme this week, let’s talk podcasts. Big announcement from Spotify (again): a partnership with Epic Games, to launch a podcast series centered around League of Legends. This is an interesting one, considering that gaming and music industries have been getting closer on lockdown, and it was very clear on livestream platforms (such as Twitch). But now, we’re talking music streaming platforms, working on their tides with the gaming industry and betting on new audiences to add to the platform.

Although, we have to nuance it there. The first main personality who joined Spotify for an exclusive podcast is leaving, slamming the door on the way out. Joe Budden said his podcast will not be available on Spotify by the end of September and is looking for other alternatives. Joe Budden blames the company for stealing audiences, and capitalizing on numerous content to grow their audience, without true interest for the content. So there are still aspects to work on here, but it sure seems like the company is doing well anyway on that topic.