An introduction to our Monthly Tech Update 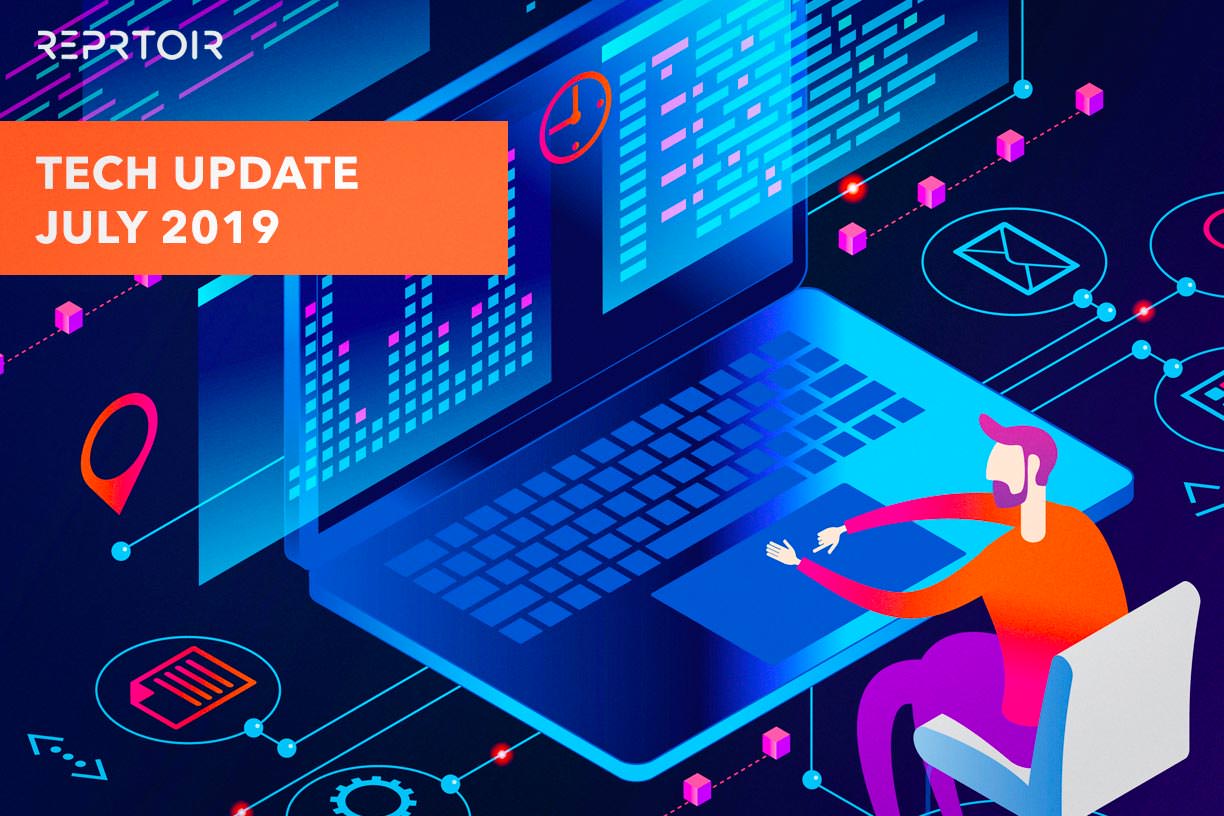 An introduction to our Monthly Tech Update

Our team of developers is compact, fierce and extremely resourceful. So they get things done quickly and efficiently. This leads up to publish new features we're proud of on a regular basis. That is why we've decided to start sharing monthly tech updates of our technical progress.

We intend on keeping this tech update short and concise, but because this is the first post of its kind, we felt like sharing with you the overview of Reprtoir’s tech expansion of this past year.

I shall also take the liberty to rant about whatever comes to mind and is relevant to the topic at hand.

Reprtoir’s beta program launched in February of 2018. At the time we had the main components of the platform ready in terms of ingesting, indexing, managing and editing metadata, and audio files. All of this was performed inside of an impeccable single-page styled interface where panels, panes, and tabs are kings and refreshing pages to get from A to B are only painful things to reminisce about.

One aspect of Reprtoir that we spent a lot of time, effort and headache on was something that almost every single CMS (Content Management System) offers but somehow very few implements deeply enough: tag and list management. In Reprtoir you can create any tag and its associated tag category on the fly within a matter of seconds. Not only that but you can also display that freshly created custom tag category as a column in your assets’ lists’ and sort them ‘till the cows come home.

I shall spare you any further details on the matter but this is something we have mastered and that will make the life of any user much easier once they get the hang of it. We are not the first to have done this: Hubspot for instance also allows users to create custom tag categories and display them in lists as well but at the expense of precious seconds being wasted navigating through a maze of web pages.

In terms of imports, we already had the Releases Importer tool up and running back in February 2018, but it was much less interesting than it is now. At the time it only pulled in album and track metadata and not much else.

We have now enhanced it with an amazing tool called the Metadata Collector whose main feat is scooping up anything of interest that Spotify gladly hands over to us. For instance, we go fetch audio characteristics that the markets tracks and albums are available in, moods, genres, follower counts, links, and tons of other super useful stuff. The Collector does this for tracks, albums and artists too. It has also undergone major design makeovers and improved fetching procedures over the year.

Grabbing data from Spotify is one of the most wow-effect features we’ve got. Not to say that the rest of Reprtoir isn’t jaw-dropping but importing dozens of albums’ metadata and cover art in a matter of seconds and have stuff like mood, key and Spotify popularity for every track usually plays in our favor when demoing the platform.

At the very beginning, we also had our dedicated Reprtoir Sheets system that was fully functional for bulk importing metadata. The only significant improvement we’ve added on that front is the possibility to add your own custom tag categories into the sheet.

Because I realize as I am writing this first tech update that describing what once was is most certainly boring to the average reader, here’s the hyper broken-down version:

Reprtoir has undergone more design makeovers than we can count.

We’ve added an interactive Help Center and produced tons of articles and videos to help users get around their accounts (that, to our grand dismay, barely no one ever reads anyway).

Publishers, Songwriters, and Record labels were added as new lists of resources.

We’ve implemented the onboarding procedures as well as our transactional emailing strategy.

One feature we’ve added that is worth talking about is our playlist engine that we called Music Sharing. Basically, this tool allows users to regroup selections of tracks into a playlist and share them to external partners. The sharing process is quite simple: you associate an email, a personal message and sets of rights (like allowing the recipient to download the playlist, or just stream it, etc.), you click on send and you’re done: your contact receives an email containing a link. That link opens up a landing page that displays all the tracks featured in the playlist, a player to give them a listen, as well as any associated licensing information. Perfect for music supervisors.

To be able to effectively handle your playlist’s contacts and recipients, we’ve even implemented a fully-fledged CRM (Customer Relations Management) tool.

And last but not least for this tech update, we’ve added Analytics for Music Sharing last week giving users powerful insights on how their contacts are interacting with their playlists, as well as how their tracks are performing when shared with external partners.

Other companies have based their businesses on this concept of playlist sharing. Others services like Songspace, Disco, and Synchtank all cater to labels wanting to reach out to music supervisors thanks to features that allow their users to streamline the track sharing process. It was only logical that we do the same in Reprtoir.

One major difference though in our approach is that Reprtoir was built first and foremost as a music catalog manager and not as a track handler with sharing features. Our interface is built to be able to manage catalogs of all sizes ranging from just a couple of tracks to millions, with everything a music industry professional needs to curate and administer recordings, albums, compilations, and playlists.

And that is only scratching the surface of what is going to be available in the not so distant future. In a matter of months, we are going to be rolling out royalty splits for recordings and works, contracts with full chain-of-rights components, video management, and digital distribution tools. We will keep you posted through our Monthly tech update.

I’ll leave it at that for now.